The first time I played a diminished chord I thought it sounded horrible. It was kinda like the first time I tasted beer… I couldn’t understand what people saw in the stuff.

So why do you suppose I would do an entire lesson on diminished chords?

Simple. After playing for about a year or so  I got tired of hearing the ten or so basic chords that I knew. I wanted to play something more interesting. Once I actually started to use some of the more interesting chords like the diminished chords there was no turning back.

And for that reason I want to introduce you to an easy way to learn both how to play and how to use some of the more interesting chords, starting with diminished chords. My plan is to show you a little trick that will make it easier to learn your first diminished chords, then help you to use them right away so you see the benefit. This approach will also help you to remember.

The thing is… Diminished chords sound very tense and unstable by themselves. They’re what we call “dissonant”. They sound like they want to go somewhere. You wouldn’t want to end a song with the diminished chord because it would sound unfinished.

The key to using diminished chords is to think of them as a bridge going from one place to another. Used properly and in the right chord progression they sound great. There are two instances we’ll consider. One we’ll call a pivot chord, and another is a passing chord.

Diminished As A “Pivot” Chord

Did you hear how the diminished chord smooths over the changed to that F# – B section?

Passing Through Tension And Release

Tension and release is one aspect of music that makes it sound interesting and give a feeling of moving forward. Because the diminished chord sounds unstable it is often used for this purpose. When you hear it you have the feeling of wanting to release the tension to a more stable chord. The term we use in music is “to resolve” or “resolution”. A dissonant chord wants to resolve to a more stable chord.

In this example the C# diminished 7 is a passing chord that creates tension. It’s resolved by going to the Dm7 chord.

What Is A Diminished Chord?

There are many versions of diminished chords. In this lesson you’ll learn a common version called a diminished 7 chord. Basically it’s a diminished triad that has one more note added which serves as the 7th of the chord.

How To Think About The Diminished 7th Chords

One way to think about the construction of a diminished chord is to describe it in terms of the intervals between the notes. I find this especially helpful for guitar players. The entire diminished 7 chord is constructed of four notes that are a minor 3rd apart. If you don’t know the term minor third you may want to check out my easy guitar theory lesson here.

Because the entire chord consist of the same intervals it belongs to a unique set of chords that we call symmetrical chords. One characteristic of symmetrical chords is that any note in the chord can be the root. 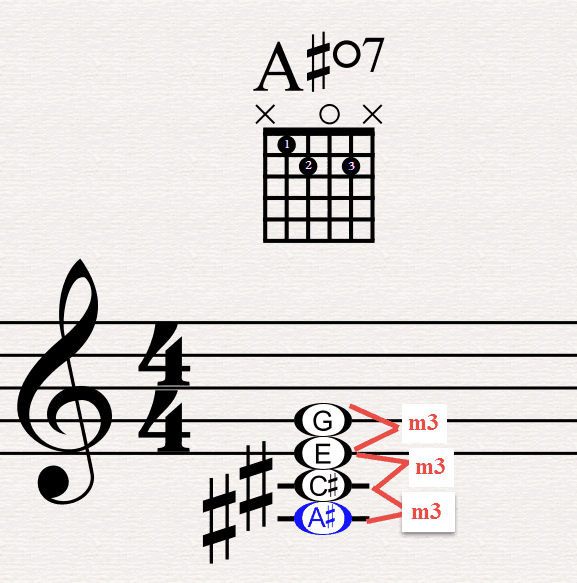 For example, let’s take the A#dim7th chord. The notes in the chord are A#, C#, E and G. Any one of these notes could be considered the root of the chord. That means this chord could be called C#dim7, or E dim7, and Gdim7 as well as A#dim7.

We’ll learn two forms of the diminished chord today. Let’s start with what I’ll call the “A” form. Play the A7 chord on the guitar using the second and third fingers. To keep things simple we’ll be using just four notes to form the chord for now. Stretch your first finger over pressing it down on the first fret, 5th string.This will change the A root note to an A#. It now creates an A# diminished 7 chord.

Now for the D form. Create a D7 chord in the open position using the second third and fourth fingers. Now stretch your first finger over and press down on the first fret of the fourth string. This will change the D note to a D#. The chord now becomes a D# diminished 7 chord.

Rather than give you many different forms of the diminished chord to start with I find it more helpful to have you practice a few forms at first, and then add to that little by little. Here’s a standard progression that will give you a chance to practice these two diminished chord forms.

Here’s a Play-Along track that you can download and play along with for practice. I’m using the same chord progression. Be sure and download the workbook so you can follow along with the included chord chart (pg. 22 – Diminished Chord Exercise ).