3 Ways To Play The B Minor Chord

The B minor guitar chord is a very useful core but often difficult for beginning guitar players. It really doesn’t need to be so difficult. My approach is to teach students the easier chord first and then build up to the more difficult forms.

The good part is that even the easiest form sounds good and will always be useful. Even after you’ve mastered the more difficult forms of the minor you’ll find times when a simple form is just what’s needed for particular situation. There’s no lost effort here.

The first and easiest form uses three fingers on the first three strings of the guitar. You can also play the open for certain. The fourth string, or D note, is a part of the B minor chord.

Take a look at the simplest Bm chord diagram here: 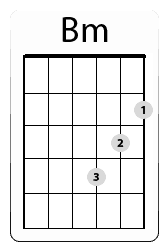 When strumming aim for the first four strings of the guitar. While the fifth string is not a part of the chord it won’t sound too bad if you accidentally hit it from time to time.

The next form I like to teach is very similar to the first one. I add one note to the court and use the pinky. Most people find this form pretty easy once they are able to play the first one. This form can be moved around the neck more easily to play other chord because of the finger on the fourth string.

Use the chord diagram for the second form of Bm: 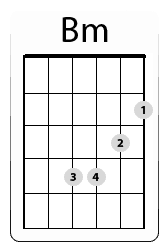 Finally we get to the third form of the B minor. The bar chord has the advantage of being able to move all around the neck to create many other minor chords. The key is to learn to make the bar accurately.

The easiest way to do this is to prepare ahead of time. I teach students an exercise called the Bar Chord Exercise which strengthens their first finger and makes playing any bar chord easier.

The idea is to start with the easier forms and at the same time practice the bar chord exercise. Then you simply make a bar across the neck with the first finger and play the second form of the chord with the other three fingers. This progression makes it much easier to learn the B minor bar chord then just trying to tackle it the first time around. It also usually sounds better.

One of the important points to keep in mind is that to really learn a chord it’s not enough to just be able to finger the chord. You must be able to move from one chord to another. For this reason you’ll want to practice chord exercises. In other words exercises that have you using the B minor in a chord progression.

A good one to start off with is a basic turnaround in the key of D. Here are the chords:

Here’s the diagram for the B Minor Bar Chord:

Once you feel confident with the B minor chord it will open the door to playing many more songs and help you to feel more confident about your guitar playing in general.

Remember – with patience, persistence and good instruction you’ll be able to play awesome guitar. Even more importantly you develop the self-confidence to be able to take on new and exciting challenges. That’s what makes life and enjoyable adventure.