“The House of the Rising Sun” is a traditional folk song, sometimes called “Rising Sun Blues”. The most successful commercial version, recorded in 1964 by the British rock band The Animals, was a number one hit in the UK, US and France.

I’m going to show you an easy version of House of the Rising Sun. The version of the song by The Animals is originally in the key of A minor. But we’re going to do it in the key of E minor. There are two reasons for this:

The whole song is basically the same pattern. The words change but the melody and chords are the same. Let’s break this down starting with the chord progression:

You can play the G chord a couple different ways. I prefer a four finger G chord:

You could also play a three finger G if your like that more: 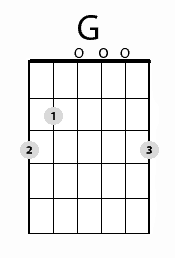 The C Major chord is the regular “Folk” version.

And then we come to the A chords. I prefer a 2 finger A Major. I use my index finger to bar the third and fourth strings. If the three finger A Major feels better then use that.

We’re also sneaking a B7 on the second and fourth lines.

I’m going to use a simplified strum pattern. But stick around to the end of the video to hear the version used in The Animals’ version of this song.

The song is in 6/8. Which means there are 6 beats in the measure, and the eighth note gets the emphasis. You can listen to this at 2:28 in the video to get a feel for it.

Before we get too far, let’s get comfortable with the chord changes. This is a useful tool for learning new music. Start with one strum per chord. Don’t worry about counting or timing. Just try to get the changes clean. Start with the first line:

Now the strum to the first line:

Once that sounds good move on to the next line. The B7 may be a little tricky. Try to play it with all four fingers. Make sure that all 5 strings ring clearly.

Here’s a helpful tip when learning new chords: Fret the chord without strumming, then release. Then fret the chord again, and release. Do that a few times, then you can add in a strum before releasing. This can help you get the muscle memory down a little quicker.

Once you have that chord pretty well down, try one strum per chord.

And of course, add in the strum for the same chords.

Now it’s time to put the first two lines together (that’s half the song already!):

The third line is the same as the first, but the fourth line changes a little:

You’ll go from the Em to the B7, then back to the Em twice. The Em to B7 sounds really good, and it’s a chord change that’s a lot of fun to play.

That’s the whole verse! Now it’s time to connect everything. Try playing all four lines together. Do one strum at a time to start, to get used to the changes. Then add in the strum.

So what do you think? Are you ready for a cool new strum? It’s totally optional. If the Folk strum is enough for now then that’s great too! If you’re ready for The Animals’ original strum then keep reading.

The original strum is a cool technique. It’s called a rake strum. To make this smooth, imagine strumming a chord but your pick is catching on every string. Almost like it’s dragging. So it’s not a powerful strum where you hit all of the notes at the same time.

You may also notice I’m hitting the bass note of each chord first. And then rake strum the rest of the chord.

To finish the chord, I do an upstroke to pick the high notes in the chord. It’s the top 3 notes, from high to low.

Just like learning the chords, you can practice this technique on just one chord to start. When you have a good grasp on it, try changing chords. This takes a little bit of time and practice to make it sound smooth. But it’s a lot of fun when you do.

One more thing before we close for today. There’s a little interlude that connects each of the sections together. Fortunately it’s the same chords and almost the same order as the main section.

You start by playing the fourth line, but it gets cut short. You’ll play the Em and B7, and jump right into the interlude. Here’s the last line and the interlude:

Thanks for joining me today, it’s been a pleasure doing this with you. If you haven’t already please subscribe to my channel and leave me a comment. I really love to hear from you.