You work on something over and over. Then one day you sit down and it comes together.

Anyone who's been learning for a while knows that there comes a time when it seems like you’re not getting anywhere.

And it doesn’t seem fair.

And it doesn't seem to get better.

Or you finger a bar chord.

You stretch your finger over the fret, then put the rest of the fingers down.

Now you strum the chord. It sounds like crap!

Okay, start over… finger it, strum it. It still sounds like crap again.

If you're anything like me you’ve had moments of wanting to hang it up. more than moments.

I know it might not feel good at the time, but it is a normal process. Everyone experiences these ups and downs.

I had an instructor draw a graph for me to show how this looks. 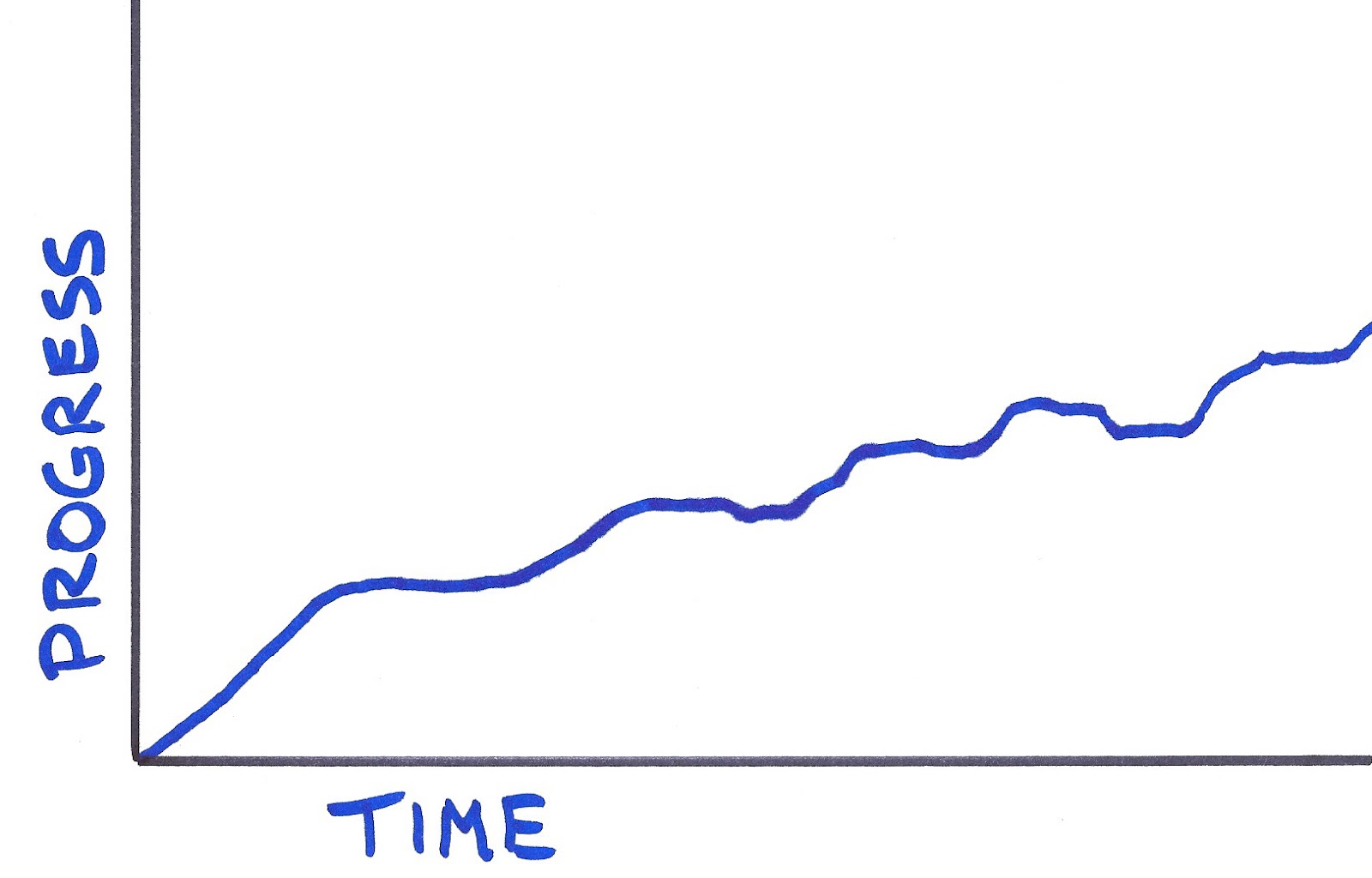 In the beginning, things seem up and up. It’s new and exciting.

Then there’s leveling off. That’s the infamous “plateau”.

After that small rises, lots more plateaus, some downturns, rises and so on.

At the time I had the audacity to think “glad I'm over the hard part”. NOT!

The bad news is the plateaus are here to stay. It's part of the journey.

After you've been through a few ups and downs you began to have faith you’ll get through this next one.

Here's some even better news…

Because you feel frustrated doesn't mean you're not progressing. From your perspective, you can't see things as they are.

If you could see your progress over time you’d know you've improved. Maybe a lot.

But knowing what's going on can help. It's a little easier to keep going when you know that it's a normal part of the process.

Here are a few other things that I’ve found helpful…

Mark the things off that you’ve learned. This gives you a visual record. Looking at this will help you “see” your progress in another way.

The second reason to do this is it'll help you to realize how much you've improved. This can give you a motivational boost.

Make smaller steps. It's common for all adults to want to go through the steps quickly or even skip steps. I've been as guilty of this as anyone. Have you been struggling with something for a while? It might be because you’ve moved too quickly through earlier steps.

This is not “bad”. It’s just information… feedback.

Try going back to some earlier songs or exercises and see if you're at 80% (see the 80% rule).

Narrow your focus. This is like making smaller steps. Sometimes we try to take on too much and it becomes difficult to make progress on any one thing. You may want to cut back on the number of things you're working on.

These are some examples to give you an idea.

If you're working on the song with 3 chords, try practicing changing between two of the chords.

Practice a part of an exercise instead of the whole thing.

I've come to realize that learning guitar it's not so much about information. It's much more about plodding along.

Persisting through the ups and downs.

Accepting the wins when they come along.

Letting the frustrations go so you can come back at it another day.

And then one day something like this will happen...

I was about a year into learning guitar. Up to that point, I had struggled like most students. I remember wondering if I would ever get this.

I was sitting at a campfire with some friends. They asked me to play a song that they knew so they could sing along. I did.

I was playing and everybody was singing. We were having fun.

Then I looked down at my hands. It was working!

I was strumming and changing chords without thinking about it. It was a great feeling.

I knew at that moment that I was a “guitar player”.

The irony was that it wasn't until later that I understood I had been a “guitar player” for a while. I didn't realize it.